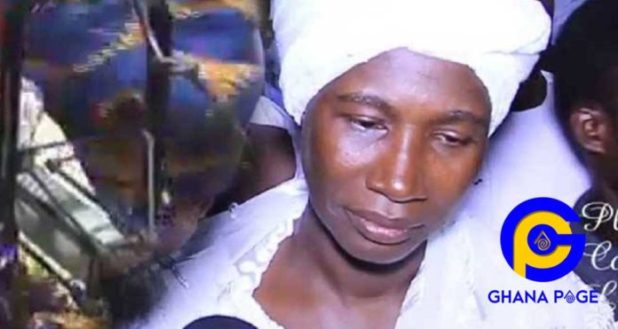 A lot of allegations and accusations have been made and thrown at the “Afunumu Ba” hitmaker, Cecilia Marfo in recent times. Many of those allegations center on occultism and fornication.
Well, a video which allegedly to confirm the occultism allegations has been obtained by Ghpage TV on Youtube and it’s very worrying for someone who is a popular Evangelist, prophetess, and a sensational gospel musician.

In the video, Cecilia Marfo was confessing to being possessed with marine spirit popularly known as Maame Water in local parlance.
A man of God was praying over a very ill Cecilia Marfo and the spirit sort of spoke through her and revealed she (the spirit) is the one possessing her body no.

About two weeks after a former associate pastor of Cecilia Marfo and her former cook made allegations against her including an allegation that she slept with another pastor at the church, an audio of the said pastor confirming sleeping with her popped up.

The former cook also alleged that Cecilia Marfo once asked him to put his manhood in her hands for her to pray for him.

Despite all these crazy allegations including one that she buried money with Ghanaian gospel musicians names on it at her church, Cecilia Marfo remains silent. She has never come out to confirm, deny or even attempt to explain any of the allegations.

Previous ‘You spoke English, not Greek, apologise to Ghanaians’ – Opuni Frimpong to CID boss
Next (pictures ) WE ARE WITNESSES OF YOUR NUMEROUS ACHIEVEMENTS” – JASIKAN CHIEF TO PRESIDENT AKUFO-ADDO

By;brightwebtv/nana asare barimah A lady (name withheld) is apologising to her biological sister for …