(Video)Patapaa performs with his German girlfriend at Ghana Meets Naija 2019. 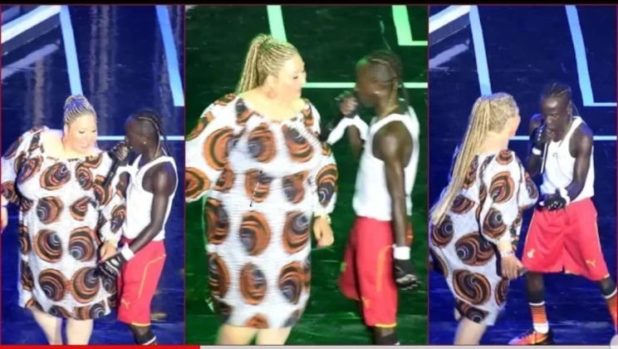 A lot of people thought Patapaa would just turn-out to be one of those ‘1-minute fame’ celebrities after his One Corner hit song.
But Justice Amoah as he’s known in real life has branded himself into a game changer when it comes to the Ghana music industry presently.

It’s mostly said that his music doesn’t make sense. However, he has said on multiple platforms that whether his music makes sense or not, he believes his prime purpose anytime he climbs the stage to perform is to entertain patrons. This he does and do very very well.
Patapaa was at the Ghana Meets Naija 2019 yesterday which happened life at the International Conference Centre.

He contributed his very best with laudable energy and vigour.

There was no dull moment as he dropped his pacy hit songs back-to-back.
The icing on the cake for his performance was when he brought out his German girlfriend on stage much to the merriment of patrons.