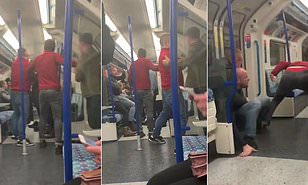 Tensions boiled over between angry Arsenal fans on the underground in London after their side’s humiliating Europa League final defeat.

A video, taken after the match on the Piccadilly line, showed one supporter in a green jacket, surrounded by two friends in Arsenal tops, goading another on a packed tube.

Taking exception to something that had been said, the other – in a black jumper, had to be restrained by his friend.

The scenes came after the club’s Europa League final defeat

Clad in red jumpers, some men tried to step in to prevent a full blown fight

He continuously called him a ‘lying c***’ and was eventually hauled to the floor in order to stop him getting to the antagonist, who continued to shout ‘come at me,’.

The man in green then turned on one of his own party, believed to be his brother according to the video, attempting to knee him in the face as he tried to stop the confrontation.

He responded by sarcastically applauding in his friends face, appearing ready to give up protecting him.

The confrontation caused many people to move away, with many leaving the carriage at one of the stops, while others simply moved further down and away from the scuffle.

The scenes came after Arsenal’s 4-1 Europa League final defeat at the hands of London rivals Chelsea.

The final was held out in Baku, and transport difficulties meant many supporters stayed at home, watching the showpiece in pubs throughout the capital.