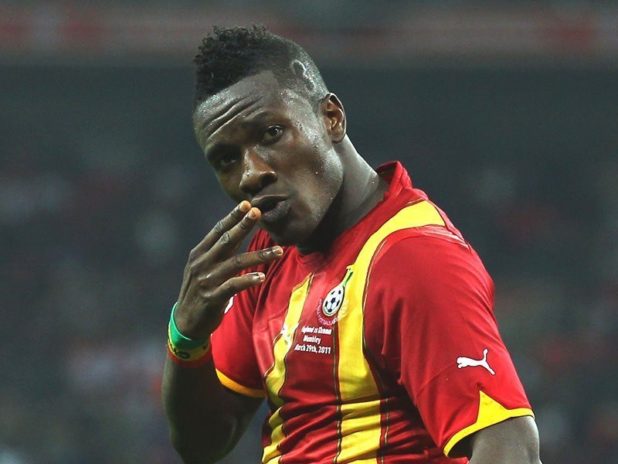 Ghanaweb.com can exclusively reveal that Black Stars striker Asamoah Gyan has rescinded his earlier decision to retire from the national team after a lengthy chat with President Nana Akufo-Addo on Tuesday.

An official Press Release confirming his comeback into the national team is expected in the next few hours.

Our sources in the Gyan camp say the player could not refuse the President’s request for him to return to the national team for the 2019 AFCON.

Gyan will, however, be the General Captain, whiles Andre Ayew will be named as the substantive captain as was earlier reported.

Eugene Arhin who is a Director of Communication at the Presidency confirmed the telephone interview between Gyan and the President in a post on Facebook.

He also confirmed the fact that it was the President who has impressed on the player to return to the team for the sake of unity and peace.

In a post of Facebook, Eugene Arhin said “The President of the Republic, Nana Addo Dankwa Akufo-Addo, this afternoon, held a meeting with the Minister for Youth and Sports, the President of the GFA Normalisation Committee, and the Chair of the Management Committee of the Senior National Football Team, the Black Stars.

The meeting, a continuation of the regular meetings the President holds with them, discussed, amongst others, the preparations being made towards AFCON 2019, and how to end Ghana’s AFCON trophy drought.

President Akufo-Addo, subsequently, also spoke on the telephone with Asamoah Gyan, and informed him of the considerable national disquiet over his decision to retire from the Black Stars.

The President urged him, in the national interest, to rescind his decision to retire from the Black Stars, and make himself available for selection by Coach Kwasi Appiah”.

President Akufo-Addo was on Tuesday, May 21 forced to reach out to the technical team of the Black Stars, the Management Committee, and the Normalization Committee of the Ghana Football Association as well as the Asamoah Gyan’s camp to get an understanding of the circumstances that led to the Gyan’s retirement from the national team.

Gyan quit the team yesterday over a decision to strip him of the captain’s armband for AFCON 2019.

He released a statement late Monday evening recusing himself from AFCON 2019 over what he claimed was a decision by the head coach to hand the captaincy to another player for the Africa Cup of Nations in Egypt.

Gyan, 34, said he could not ‘pretend to be happy’ with the decision.

Kwesi Appiah is expected to name a provisional 30-man squad for his 3-week training tour of the Dubai, which will be cut down to 23 before the tournament kicks off on June 21.

Ghana are housed in Group F along with Cameroon, Guinea Bissau and Benin.

Previous US Ambassador moves to work in Kumasi
Next TODAY WEDNESDAY, 22 MAY 2019 NEWS PAPERS