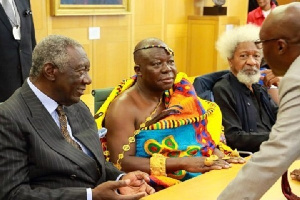 E-President Agyekum Kuffour in an interview with Manhyia Palace based radio station, Opemsour FM heaped praises on the great king for his exemplary leadership and achievements.

Kuffour, who is a former Board Chairman of the club could not have concluded the conversation without making comments about the club.

“As you know, I was once made the Chairman of Kotoko but I had to divert to politics to serve Ghana” he started with.

He went ahead to urge the leadership of the club to see to the welfare of the players.

“I know injuries are part of the game, reason why I would urge the managers to see to the welfare of the players, they must be paid well and have good insurance policies to cover them because their lives could be ruined through injuries.

“Elsewhere footballers are paid better than Doctors, Lawyers and other professionals but what do we see here in Ghana, players being paid less than a Ghc 1000, what happens if they get injured and can’t play anymore?”

He also took time to have some words for the footballers.

“And to the footballers, I’m clamouring for your well being but you must also serve the club (Asante Kotoko) with your hearts. The moment you are given the privilege to wear the Kotoko jersey, remember you’re serving one of the biggest clubs in Africa and that, you must serve with all your heart”

Asante Kotoko and for that matter, Manhyia Palace are in the process of forming a Board as required by the Club Licensing Board of the Ghana Football Association.

The former President pleaded with the Great King to appoint competent people on the Board.

“The struggle for leadership at Kotoko is real due to how lucrative the club looks, so I will plead with Otumfour to appoint people who understand the game and will lead the club with the truth.

“The leaders should also be protected due to the fact that there are other people who will attempt to bring them down through gossips” he concluded.

Previous Police arrests wife and lover after mistakenly dialing commander’s number to hire him as hit man to kill husband
Next How do you expect me to feed my family?- Kwasi Appiah barks at GFA « Prev

By;brightwebtv/nana asare barimah Cristiano Ronaldo is remaining in quarantine in his Madeira home after …