I’ll not be SHOCKED if Kotoko sack me – CK Akonnor

Asante Kotoko coach Charles Akonnor says he does not the fear sack and will not loose sleep over fears of being yanked from the Ghanaian powerhouse following the side’s failed Africa campaign. 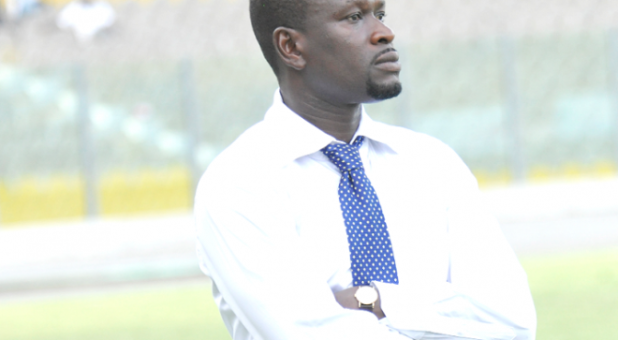 Akonnor’s future has come under the spotlight following the side’s exit from the CAF Confederation Cup.
There have been wild campaign in the local media in Kumasi in particular- home of the Ghanaian giants to get the former Hearts of Oak gaffer axed.

While the club’s supporters are divided on one front, the club’s top hierarchy appears to be undecided on the long-term future of the coach.
When quizzed by Accra-based Atinka FM if he will be shocked if gets the sack he responded: “Oh why will I be shocked? It’s football and a lot of things happen. In normal life, the reason why we get shocked is when you don’t open up to anticipate anything. If you take it like anything can happen, you won’t be shocked.”
Akonnor clearly readies himself for the onslaught and verbal missiles being launched aimed at getting him sacked by the club.
The knife was always going to be out for him after the team capitulated against Zambian giants Zesco United to end their adventure in this year’s Africa inter-club competition.
The familiar story of using coaches as the scapegoat is all back, starring in the club’s face again amid fears the former Hearts of Oak gaffer will be sacked.
Akonnor took charge of  the team six months ago and took just THREE months to prepare the team for their African adventure, which ended at the group stage after a 2-1 defeat to Zesco United over the weekend.
While Akonnor appears to be enjoying the backing of  the club’s General Manager, George Amoako, other senior figures within the club have raised concerns about his competence, according to the media.Il
Media reports claimed the former Black Stars captain threatened to quit his role, just a day before the side’s 3-0 win over Nkana FC over interference to fuel reports he’s getting  increasingly disillusioned with life in Kumasi.
Kotoko top brass will hold a showdown meeting to decide the long-term future of the gaffer despite guiding them to the group stage of the competition for the first time in a decade.
The decision to dispense with the services of the former Dreams FC coach will come as a massive shock to the local footballing fans after he appeared to have weaved his way into the hearts of several Kotoko fans.
But in a club which is punctuated with so much ‘politics’, the move to sack him six months into his three-year reign may not come as a surprise to others.
Kotoko’s Cinderella story in CAF Confederation Cup came down crashing after losing to Zambia giants Zesco Unitd, which followed their 1-1 draw at home to Sudanese powerhouse Al Hilal, which effectively killed their ambition of qualifying to the quarter-finals.
Akonnor joined the Porcupine Warriors on a three-year deal in October 2018.