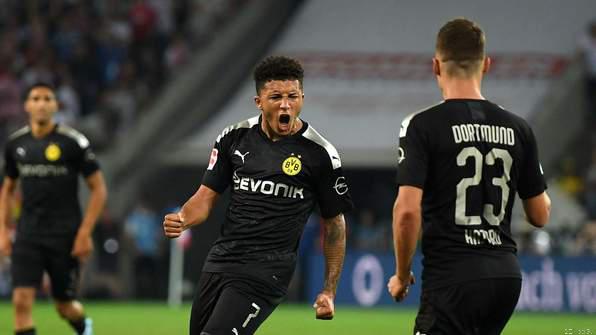 Jadon Sancho has become the youngest player in Bundesliga history to score 15 goals in the league, breaking a half-century old record.

The 19-year-old attacker continued to cement his status as one of the league’s best players as he delivered the equaliser for Borussia Dortmund against Cologne in the club’s second match of the season Friday.

A first-half goal from Dominick Draxler had put the hosts up, but Sancho’s 70th minute goal, assisted by Thorgan Hazard, helped turn the tide in the contest.

Achraf Hakimi would find the back of the net 16 minutes later to give Dortmund the lead while Sancho chipped in again late on, assisting Paco Alcacer’s stoppage time insurance tally to give the visitors a 3-1 victory.

That brings Sancho’s total up to two goals and two assists already in the new season as he picks up from where he left off last campaign.

Last season saw Sancho score 12 goals and add 14 assists in the league as he helped Dortmund to a title challenge that saw them take the race all the way to the final matchday of the season, though they fell short to Bayern Munich.