JUST IN: Ghana U23 team escapes plane crash on their way to Gabon for AFCON second leg 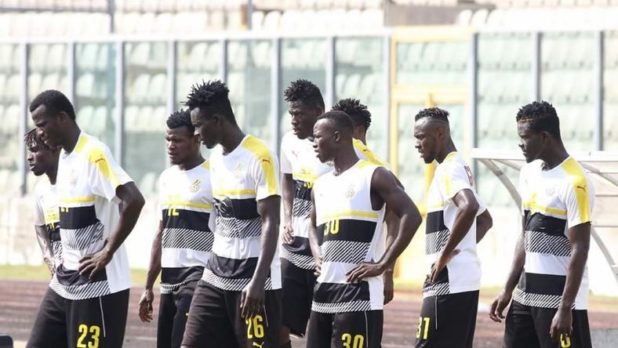 Ghana’s U23 side The Black Meteors have arrived safely in Gabon for the return leg of the U23 AFCON qualifier but not without some scary moments after their flight failed to land in Gabon on arrival.
With a contingent of 33, Ghana would have been thrown into a state of national mourning after the Askyy Airline on which the team was traveling could not land due to bad weather.
The flight kept hovering over the airport in Gabon for two hours but could not land.

Following the scary moment, the pilot was forced to move to Cameroon for a safe landing while waiting for a message from Gabon before returning.
The contingent spent an extra hour at the airport in Duoala before finally returning to Gabon where they were able to land safely in their second attempt.
“We arrived in Gabon safely but very scary.  We were in the sky for almost two hours but couldn’t land because of bad weather and had to go to Douala, Cameroon instead of Libreville, Gabon and wait for more than one hour, before trying again. Thank God for traveling mercy. We are now in our hotel,” coach Ibrahim Tanko revealed to Footballmadeinghana.com
Ghana will take on Gabon in the second leg on Tuesday to determine who will qualify for the 2019 U23 AFCON.
Ghana took first leg advantage after beating Gabon 4-0 on Saturday at the Accra Sports Stadium in their CAF U23 Cup of Nations penultimate qualifying round.
Goals from Kwabena Owusu, Bernard TekpeteJUST y and a brace from Osman Bukari has secured the chances of the team making into the final round of the qualifiers despite a game to play.
Gabon will have a mountain to climb in this encounter as they have to defeat Ghana by five unanswered goals should they aim to qualify in the reverse fixture which is scheduled for Tuesday March 26, 2019.