By:brightwebtv.com/Martin awuku.
Some few weeks ago, a photo of Kotoko fan mashing on some bread and beer went viral on Social media with many asking how the man is even able to do that. 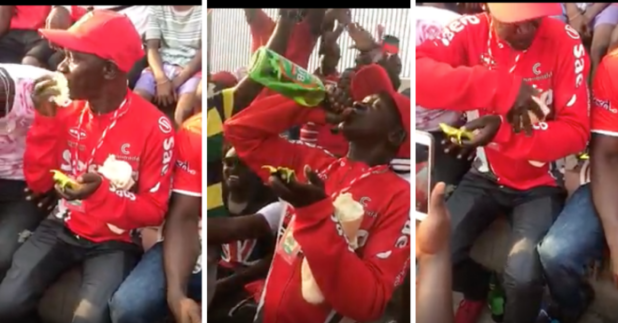 We’ve heard stories of mates drinking energy drinks like Rush with meat pie in trotro and never did we know someone could actually take it to the next level by drinking an alcoholic drink with bread.

Read This- Former Slay Queen Shares True Story Of How She And Friends Were Paid Ghc200k To Eat Human Sh*t In Dubai After Being Chopped By Men
The Kotoko fan who looks like someone in his late 40s or early 50s seems to enjoy it and this time, he’s been captured again at the Kotoko Vs Nkana (Zambia) game yesterday drinking his Club beer with tea bread and pear.

The man looks excited as he’s cheered on by other Kotoko fans.

Previous Ghana’s Creative Arts Industry is a hidden gold mine that needs investments – Afeku to gov’t
Next Tornadoes kill at least 23 in Lee County, Alabama