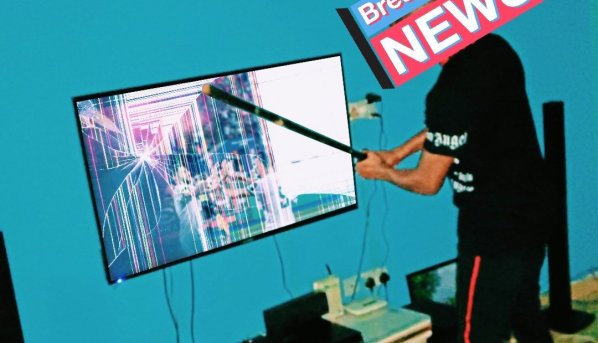 An angry man who went to bet over GH¢10,000 in favour of the Super Eagles of Nigeria against their Algerian counterparts in anticipation of a huge return has been left disappointed.

Out of frustration, he reportedly vented his spleen on a LED Television set in his room and smashed it after the Nigerian National team were eliminated in the Semi Final stage of the ongoing African Cup of Nations (AFCON) tournament.

Despite being promised a whopping $50,000 by for every goal in their remaining two matches at the championship by business magnate Dangote, the team failed to live up to expectation.

Riyad Mahrez rifled in a stoppage-time free-kick to earn Algeria a dramatic 2-1 victory over three-time champions Nigeria on Sunday and set up a rematch with Senegal in the Africa Cup of Nations final.

The final results led to the young man having his emotions taking the better part of him as he could not fathom how he was going to face the situation at hand smashing the television.

A colleague who shared the unfortunate incident on twitter said “My guy just destroyed his TV because he lost his 700k bet😭😭😭😭😭. Watching Super eagles (chicken) is not easy.@NGSuperEagles #AFCON2019 #ALGNGA #mahrez #Algeria