On this day, November 2, 1971, the whole of Ghana’s then six million population got consumed by shock. That day, a new song emerged, that children will forever sing along in remembrance of the tragic end of a hero;

Literally translates (Robert Mensah, Africa’s number one goalkeeper. He has only three days to fly and play abroad. But some jealous idiot stabbed him to death with a broken bottle) 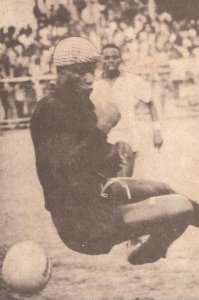 THE STORY: On October 27, 1971, Ghana Black Stars drew 2-2 with Togo in Lome and was beaten in Accra, by the same Togolese side 0-1 with Ghana losing qualification for AFCON 1972 in Cameroon.

The following day, while his kotoko teammates in the Black Stars travelled back to Kumasi in preparation for their African Cup championship semifinal match against Greats Olympics, Robert Mensah did not join his teammates to Kumasi.

He quietly went sipping a drink at the Credo Bar in Tema Community 7 neighborhood. Suddenly, a brawl breaks out in the bar.

Inspector CJ Acquaye of the Tema Police told the Daily Graphic that a quarrel had ensued between Agya Awere and Joseph Ackersou, two local men who were also drinking in the bar. Mensah, according to the police report, became involved in the quarrel.

A third man, a 31-year-old electrician called Isaac Melfah, was remanded in custody, accused of having followed Mensah from the bar after the fight and stabbed him. Mensah bled profusely, was rushed to the Tema General Hospital and operated on. The prognosis seemed positive. But at 2.30am on Tuesday, November 2, 1971, Mensah died from the wounds. At a tender age of 32. Bob was gone.

His funeral became a biggest procession of tragedy, as his body makes a long winding journey from Tema to Accra, Accra-Kumasi and Kumasi to Cape Coast, being occasionally stopped in other smaller towns as fans wanted to show their last respect. The Daily Graphic Reported of his body’s arrival in Kumasi;

“There were thousands of mourners, young and old … Schoolchildren refused to attend classes and rushed to the Kumasi airport and the sports stadium to pay their last respects … there was wailing and weeping at the nooks and corners of the city. Traffic stood still as taxi-cabs, private cars and commercial vehicles wrapped in the red traditional colour of Kumasi Kotoko lined up in the streets tooting their horn signifying their last post to Robert Mensah.”

It was reported that a tro-tro driver died at the Okomfe Anokye Hospital after drinking his head off after seeing the body of Robert Mensah.

Mensah’s convoy then went on to Cape Coast, where he had begun his career with the Ebusua Dwarfs. His coffin was presented at the town hall and then taken, via Victoria Park, to St Francis’s Cathedral, where he was buried. That day, the Daily Graphic printed on its back page a photograph of a concrete slab near a kiosk selling cigarettes and soft drinks, 150 yards from the Credo Bar in Tema. It was spattered with Mensah’s blood. Perhaps, the most poignant memory it will ever leave in the minds of Ghanaians

A year later, the popular Ghanaian guitar band, the Negro Kings dedicated a song to him and today the original stadium at Siwdoo, Cape Coast bears his name and a statue was erected in his honor. All this, so that no one forgets the best goalkeeper ever produced in this land. The man who was 2nd in the 1971 African Best player Awards, behind his compatriot Ibrahim Sunday.

Robert ‘Yashin’ Mensah, who was noted for his black jersey and magical cap. The goalkeeper who could tease the most potent of attackers, by throwing the balls back to them, and will dare them to shoot back at him for another save. And he will save.

Robert Mensah was unique, supremely gifted and the type that comes once, perhaps every 100 years. You can doubt, but those who watched him, like my dad, will never forgive you. 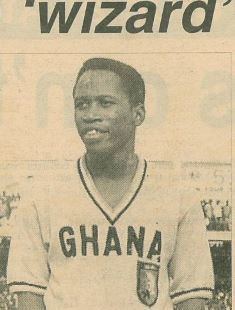 When I speak to Osei Kofi, Mensah’s teammate at both Kotoko and Black Stars, he always can’t help but drop tears, even after 46 years. 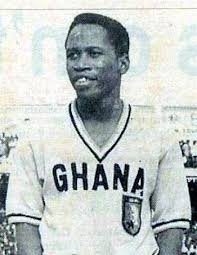 He believes Mensah’s greatest ever display of supernatural abilities, was that game in Zaire (now DR Congo), where Robert single-handedly secured the African Club Cup for Kotoko. Osei Kofi (now a reverend minister) would say Mensah’s show in the game would have won him the Golden Gloves of FIFA if it happened today. 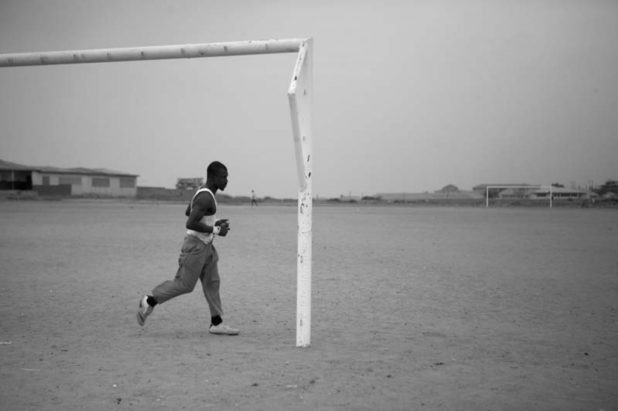 That day, Robert saved two penalties, awarded dubiously to the home team – to turn the huge Tata Raphael Stadium and its 120,000 spectators – into a cemetery.

Mobutu Sessesekou wept as his TP Englebert of Kinshasa lost the 1968 African Clubs Cup final of 1968 to Kotoko, and it was through the magical efforts of Robert Mensah

Those who watched him have always failed to describe him with words, his immense qualities. “Robert stood more than 6ft tall and he handled a football with the same contemptuous ease that Joe Louis treated the gloves. He had a superb sense of anticipation, great physical fitness and the courage and confidence to go down to the feet of dangerous attackers. And of course, those magic hands that could pick a ball out from the air as simply and effortlessly as the feet of legend Pele scores goals, will be seen no more.” Daily Graphic columnist Addo Twum asserted.

The most, perhaps heart-wrenching story to emerge after his death, was that, Robert had received an offer from a German club to play professional football. An unfortunate and untimely death truncated a rare deserved.

Robert Mensah’s popularity transcended beyond Ghana, and evidence was at his funeral, where the Togolese, Nigerian and Ivory Coast Sports Councils made donations to his widow.

Forty-six years after his death, let us never forget history. History of the greatest we ever had, albeit his controversies. The history of what a murderer robbed us.

The history of Robert Mensah, one of the greatest we have had. And still the greatest pair of hands we’ve produced.