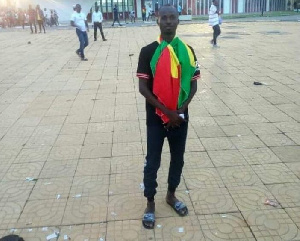 The former Nalerigu Nursing Training College nursing student stormed the pitch during Ghana’s 2021 Afcon qualifier against South Africa in a desperate attempt to take a selfie with the Atlético Madrid midfielder.

He was arrested and subsequently detained at the University of Cape Coast Stadium where he was processed for court.

The 25-year-old was fined a sum of GH 2,400 by a Cape Coast Circuit ‘B’ court today or risk going to jail for three months if he defaults.

He was also made to sign a bond of good behavior after he was found guilty on two counts of misconduct.

Speaking in an interview with Accra based Kingdom 107.7 FM, Mr Jacob Partey confirmed the family has decided to lift the burden of the fine on Awal.

“We have decided to pay off the fine for Awal. There are many players in the Black Stars team but since he got into trouble trying to show his love for my son, although illegally we have to come in help out. So I will pay the money and Partey himself will be notified”

Previous Nat’l shrine needless – Traditionalist
Next Okyenhene calls for ‘One Region, One Ministry’