Wedding ceremonies are done to bring two families together and have a cordial relationship with both in-laws but a newly wedded lady from Nigeria has shamefully fought over jollof rice with her husbands mother at their reception grounds. 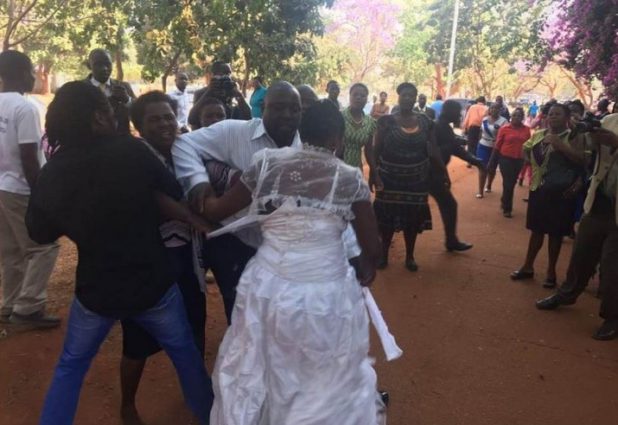 A tweeter user, @SeeHausaBoy revealed that the bride fought her mother in-law at the reception grounds and the man had no option than to call off their wedding. According to him, the couple had prepared separate foods to serve their guests separately.
Indicating that, the groom’s food finished earlier at the reception grounds and there were some of the brides food to serve at the grounds. Adding that, the groom received some important visitors and they had no option than to contact her wife for some food which his mother did but his wife refused to give his mother in-law.
The mother-in-law defied the bride and went ahead to dish out food from the ice chest to be given to the very important guests.

The wedded lady was set to go away with her husband, but she immediately got down from the car leaving her husband alone just to snatch the food of her mother in-law and put it back in the ice chest.
In that shameful act, the mother in-law slapped the lady and to everybody’s surprise she replied back her slap. The shameful act by the bride left her husband with no option than to discontinue the marriage.
This is the story as narrated:
“I asked a colleague how her weekend went and she said she went for a wedding in Lagos and something dramatic happened
My colleague is a friend to the groom and as such, had to represent. They worked back in day as bankers in one of the top generation Banks. There was lotsa food and drinks, DJ was on point, everything was going on smoothly.

But then again, both the groom and the bride cooked separately to ensure the meal gets to all the people they invited (which i think is the norm these days with Yoruba weddings) but unfortunately, the food on the groom side had finished in no time
Then walked in a very important guest from the groom’s family, a very close relation of the mother in law of the bride. He apparently showed up late and she needed to have them served. they were just too important not to be entertain.
The mother in law approached the bride to speak to her caterer to have them serve her guests who had just arrived. to her surprise, she declined and said the food remaining was for some guests at home. The mother in law ignored her and went to dish out some food from the cooler and ordered it to be taken to the guest who were already seated and waiting. The caterer couldn’t stop her because after all, she was the mother of the groom!
Next thing, the bride came down from the car and ordered that the food be returned. the guys carrying the food were confused. the bride actually went by herself, collected the tray and poured the food back into the cooler. The Mother in law felt too embarrassed and disrespected that she slapped the bride. The bride returned the slap! the heavens let loose.
There was chaos everywhere. The groom and the groomsmen were so disappointed. he said he wasn’t interested in the solemnization of the union anymore. He left along with his family members. The bride too left as well. In the end, my colleague kukuma packed her ‘Kaya’ and left. leaving a huge number of guests murmuring at what had transpired.”

Previous Young girls should be dressing like my late daughter – Ebony’s Father
Next I will be auctioning Ebony Reigns clothes, other things-Ebony’s father