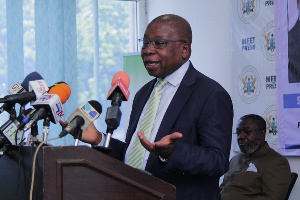 The minister of health Kwaku Agyemang-Manu is heaving a sigh of relief following the commissioning and distribution of the 307 ambulances meant for emergency healthcare delivery at all the 275 constituencies across the country.

Delivering a speech at the Black Star Square, Tuesday, Mr. Agyemang-Manu recalled how troubled he was considering the number of deaths recorded as a result of the absence of ambulances and his quest to see a change in narrative.

“Today, I’ll sleep,” he said, indicating how happy he was to see the dream realized.

The commissioning which was held on January 28, 2020 comes after an earlier postponement from January 6, over claims that the training of Emergency Medical Technicians and installation of tracking devices were still ongoing.

President Nana Akufo-Addo at a presser also remarked that although the first batch arrived in September 2019, he wanted all the ambulances to be made available before distribution in order to avoid any accusations of bias.

“The Minister for Special Development Initiative told me some of the ambulances were in and asked if she should distribute them and I said no, she shouldn’t. She should wait for the others to come in so that we can distribute all at the same time…Fortunately for us all of them will be in by the end of this month and on the 6th of January, I will commission them and the distribution will take place simultaneously and nobody will accuse me of favouritism, and so on.

“There is no justification on they being parked but if I was to send it here and not here I think you know the kind of discourse that will come,” he said in response to the decision to delay the distribution when the vehicles were needed to save lives.

The ambulances were procured under the government’s Infrastructure for Poverty Eradication Programme (IPEP) currently being implemented by the Ministry of Special Development Initiatives.

10 Covid-19 Guinean patients to be repatriated

Coronavirus: Everyone in lockdown areas to be tested