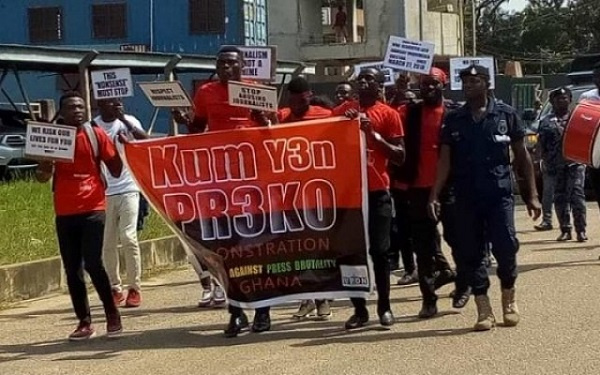 Pius Enam-Hadzide, the Deputy Information Minister is accusing the Coalition for Social Justice (CSJ) of mobilising Nigerians for their upcoming demonstration in Accra on Tuesday, July 2, 2019 against the government in ‘A March against Hardship and Oppression.’

According to Mr Enam-Hadzide, the group, together with some members of opposition parties, have no strong basis to call for demonstration.

To him, the Akufo-Addo government has over years achieved visible successes, and would continue to implement programmes that would deliver sustainable growth and improve the well-being of Ghanaians.

“I will call CSJ nation wreckers for mobilising Nigerians in Kasoa and people in Togo to partake in the demo. This is very bad. Our government has made life very easy for us in the country and so I see this demo as baseless,” he said on Adom TV’s morning show Badwam, Wednesday.

Describing the demo as a ‘child’s play’ and a ‘joke’, Mr Enam-Hadzide called on the opposition to rather see the good in the New Patriotic Party government rather than trumpeting the bad news.

On his part, the National Communications Officer of the opposition National Democratic Congress, Sammy Gyamfi said he could not fathom why foreigners in Ghana who feel insecure and oppressed cannot protest.

“If we have foreigners in Ghana who are being oppressed and feel insecure, why shouldn’t they demonstrate? In the case of the Canadian girls, the Indian man among others,” he noted.

ALSO: Audio: We have not connived with Dep. Regional Minister to undermine his boss – Sefwi-Wiawso chief

According to the group, “Ever since President Akufo-Addo ascended the Presidency, he and his government have pursued policies that have left many worse off and increasingly vulnerable.

“We note, among other things, the unbearable cost of living in the country occasioned by high cost of fuel, continuous depreciation of the cedi and skyrocketing prices of goods and services without a corresponding increase in wages.”

Previous Pastor, another in trouble for allegedly swindling 23 church members
Next NUGS EMBARKS ON GAS SAFETY SENSITIZATION TOUR IN SOME SELECTED SCHOOLS