House of Chiefs divided over statement on rejection of referendum 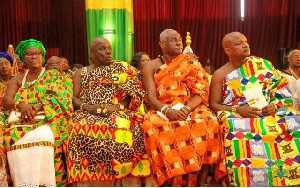 A section of members of the House of Chiefs

There is seeming division within the National House of Chiefs over the national referendum on whether or not to allow political parties to sponsor candidates for local level elections.

A press statement released on Friday, on the letterhead of the House of Chiefs and under the signatures of the President, Togbe Afede XIV and the Vice President Daasebre Nana Kwebu Ewusi VII said the House was against the government’s position on the December 17 referendum.

According to the statement, the House of Chiefs is concerned about the adverse effects of partisan politics on local level development if this referendum goes through.

“We want the citizenry to know that the referendum is meant to permit unbridled partisan politics into local government, and so the merits of the proposed reform should be assessed on that basis. We strongly recommend its rejection by the citizens”, the House said in the statement.

But, Chairman of the Governance Committee of the National House of Chiefs, Ogyeahoho Yaw Gyebi II of Sefwi Anhwiaso in the Western Region says the Statement does not represent the collective view of the House of Chiefs.

“I am not aware of any consultation or meeting. This matter should have been referred to the governance committee of which I am the Chairman but it hasn’t been referred to me. If it came to the governing council, it would have been discussed at the planning committee. But this hasn’t happened so I don’t know who and who came out with this statement on behalf of all the paramount chiefs in the country. Especially when two major political parties have taken a different stance. If we are not careful, we will involve ourselves directly in party politics. So far as I am concerned, this is statement coming from two individuals, not the house”, he said on Eyewitness News.

The Referendum which seeks to amend Article 55 (3) to enable political parties to sponsor candidates for election to District Assemblies or Lower Local Government Units has been greeted with mixed reactions from a number of interest groups.

Currently, the law, in Article 243 (1) of the 1992 Constitution, says District Chief Executives for every Metropolitan, Municipal and District are to be appointed by the President with the prior approval of not less than two-thirds majority of members of the assembly present and voting at the meeting.

Vote NO in December 17 referendum – NDC to Ghanaians

The opposition National Democratic Congress (NDC) had earlier called on Ghanaians to vote against the proposal to amend the constitution to allow political parties to participate in the District level elections.

At a press conference, the NDC Chairman, Samuel Ofosu Ampofo, said a YES vote, will open district assemblies and unit committees to “the needless NDC-NPP polarization.”

“At the meeting held last Thursday, the NEC of the NDC affirmed our long-held position that MMDCEs should be elected. We, however, took the view that the local government system should remain non-partisan and that individuals contest the District Assembly and Unit Committee elections on their own merit. We, therefore, decided to campaign for a NO vote at the referendum and to urge all Ghanaians to vote NO at the referendum. It is our well-considered view, and indeed that of well-meaning Ghanaians, that the needless NDC-NPP polarization at the national level should not be extended into the District Assemblies and Unit Committees, which is what will happen if we vote to make the local government system partisan.”