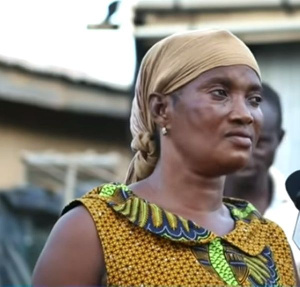 Ex-wife of Apraku My Daughter

The ex-wife of the once popular man of God, Pastor Emmanuel Apraku, also known as Apraku My Daughter has disclosed that her late husband failed to pay heed to her counsel.

Speaking in an interview with Kofi TV, monitored by GhanaWeb, after his death, she said though they got separated as a couple in 2003, she was very helpful to him because of their children.

Trying very hard to control her tears after seeing the state in which he died, she told Kofi Adoma she believes her late ex-husband would not have died in that condition if only he listened to her counsel.

“I am very sad. I have gone inside the room and I saw him lying there. If he had listened to my advice he would have been alive by now.

It wouldn’t have ended this way. I spoke to him many times but he didn’t listen and I couldn’t force him so I had to break up and move on with my life,” she added.

She added that, they (herself and children) only found him dead, yesterday when they had come to check on him after his boozing video went viral.

Meanwhile, social media users are questioning the circumstances that could have led to his demise.

They are questioning if the late pastor committed suicide out of shame after this video of him went viral.