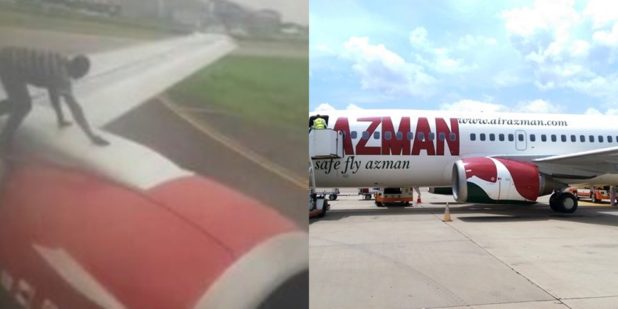 Passengers aboard a Port Harcourt-bound Azman Air flight were thrown into panic on Friday after a yet-to-be-identified man climbed the aircraft while it was about to take off at the Murtala Muhammed Airport, Ikeja.

According to a viral video shot by one of the passengers in Lagos, the man illegally gained access to the airside with a hand luggage.

The video also showed that the man illegally climbed the aircraft wing and deposited the bag inside one of the engines.

The aircraft was at the holding bay expecting clearance for take-off when the incident occurred.

The action caused panic and frenzy as some of the passengers immediately demanded the pilot and cabin crew to open the aircraft doors for them to disembark due to safety concerns.

According to her, the stowaway was arrested by Aviation Security Personnel and was taken to Tango City, a FAAN security unit domiciled at the Murtala Muhammed International Airport, Ikeja.

Also, the spokesperson for the Lagos Airport Police Command, DSP Joseph Alabi, confirmed the development to the News Agency of Nigeria (NAN).

Alabi, however, said that the case had not been transferred to the Command from Tango City, adding that further information would be released in due course.

A reliable source, however, told NAN that the individual, upon arrest, claimed he wanted to travel to Ghana but refused to disclose how he managed to gain access to the restricted airside.

By:brightwebtv.com/nana asare barimah     Coronavirus has killed thousands in China and around the world …