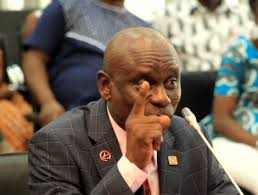 Deputy Minister of Defense, Major (retired) Derrick Oduro has described the demotion and sentencing of Corporal Wassah Lincoln Isaac to 90 days in hard labour by the commanding officer of the unit, Lieutenant Colonel WAK Ackah as harsh and unjust.

“I have sat as a member on many disciplinary committees and a commanding officer cannot give a sentence up to 90 days. He can do that up 30 days. He has erred”, the retired military officer spoke on Kumasi-based Nhyira FM morning show monitored by MyNewsGh.com.

According to the Deputy Minister, the issue regarding the prescribed punishment has not gotten to the government and until that is done, the Commander Officer has worked beyond his boundaries.

It would be recalled that a board of inquiry set up by the commanding officer of Recce Regiment, Gondar Barracks Burma camp, sat on the drop the chamber statement made by the soldier with number 201766 and found him guilty of the offence. He was said to have violated the military’s rules of engagement.

(ii) No officer or man shall do or say anything which –

The Military High Command on Friday July 5, 2019 arrested the officer who was captured in a video demonstrating his displeasure against government’s intention to construct a new 450-seater chamber for parliament.

He described calls for the construction of a new chamber with a 450-seater capacity as selfish on the part of Parliamentarians, appealing to President Akufo-Addo not to support the plan.