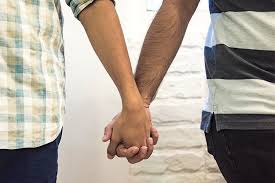 A 45-year-old native of Bodwensango Zongo in the Ashanti Region of Ghana, Prince Kwame Edward who run away to avoid being crowned the chief and Imam in 2014 as successor to his late father, has disappeared again without trace after he was caught red-handed with a gay partner in Accra earlier this year.

People in Lapaz in Accra were taken aback one afternoon back in March this year when they saw a group of elders dragging Edward apparently to send him back to Bodwesango to face the wrath of the community after being apparently caught in the abominable gay act but also to face punishment for refusing to succeed his father nearly five years ago.

The police however chanced on the scene and upon interrogation found out that Edward had not committed any visible crime and freed him from his capturers, after which he took to his heels and has been on the run again since.

According to an eyewitness with insider information, Edward run from his village because he was afraid he was going to get killed like two of his uncles who were gruesomely murdered before his own father ascended the skin back in 1990 for both refusing to step up and succeed their own father because they had converted to Christianity. The mantle of leadership in the community had passed on from one father to the first son in their lineage for many generations up to their father, Edward’s grandfather, Alhaji Kwabena Bequeen before his death in 1989 and the refusal by his first two sons to succeed him.

Edward’s father, Alhaji Kwame Musa who was third in line however accepted the offer and was coronated and remained chief and Imam of Bodwesango Zongo under strict Islamic religious laws (Sharia) until his death which meant the crown must pass on straight to his first son, Prince Kwame Edward who had become a born-again Christian himself in 1993 at age 20.

Married to one Sheila Edwin with two children, Prince Kwame Edward refused to budge and maintained his Christian faith up to when his troubles began after the death of his father when by Islamic practice he was buried the same day. Edward attended the funeral in company of his pastor but was later kidnapped by his family elders who made it clear as the first son he had to rescind his Christian religion, marry a 17-year-old girl betrothed to him and be sworn in to succeed his father as the next chief and Imam.

He tried to escape to the police station for safety but was rather arrested as had already being arranged by his family elders led by one Alhajji Fuseni who was a leader of the Islamic community in Bodwesango and also coordinator of NDC in the area (ruling party at the time) for the police to torture him until he agreed to be the chief and Imam or die through starvation. He suffered for many days until he fell sick and was admitted to the hospital where he managed to escape and head to Accra as the search by his family for him intensified.

According to their strict tradition, the punishment for whoever refused to be the chief and Imam is death before his next brother in line could replace him hence he had to be found and crowned or be killed. After dispatching his wife and kids to his wife’s hometown where none of his family knew since he had also refused to marry the betrothed girl, Edward thereby saw the need to leave the country and travelled first to Ecuador before eventually settling in the US.

His luck, however, run out when he returned to Ghana on the quiet but was spotted by a native of his home town, Bodwesango Zongo in Lapaz in Accra in March this year. The witness trailed him and found out where he lived and went back to the village to report to the elders who immediately dispatched people to Accra to capture Edward.

It was when the elders arrived that they found to their horror that their runaway prince was actually living with his gay partner after sneaking in on them and caught them red-handed in the act. This further incensed the elders who were angry at the abominable act, captured Edward and threatened to send him to the village where he was bound to be killed for both refusing to be chief and Imam as well as being gay which their traditions strictly abhors.

In the heat of the confrontation and threats, Prince Edward and his gay partner, one Robert were arrested by the Police but Edward managed to escape from the hands of the Police.

Nobody knows where he actually is because he has gone into hiding and nobody knows if he is even still in the country.