The Musicians Union of Ghana (MUSIGA) has declared its quest to help curb corruption in Ghana. 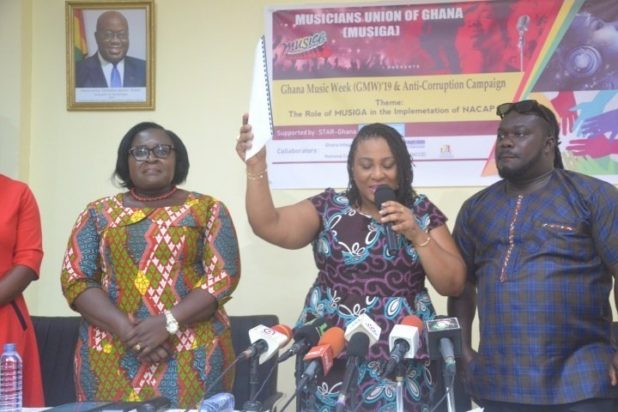 In tandem with its resolve to help win this cause, the union will be releasing an all-star song and video to drum home the message.

At the launch of the campaign in Accra, the chairperson of the National Commission on Civic Education (NCCE) Ms. Josephine Nkrumah acknowledged the role of music in various social campaigns in the past and described music and the arts as veritable tools for attitudinal change.

The Executive Director of Ghana Integrity Initiative (GII), Linda Ofori-Kwafo who was the chairperson at the programme noted that the framers of the National Anti-Corruption Plan (NACAP) have rightly indicated the role the Musicians Union of Ghana can play in this fight against corruption.
“According to NACAP, MUSIGA can use music and drama to create awareness about what corruption entails and its various forms for members of the public to engage them in the fight,” she noted.
The MUSIGA President, Bice Osei Kuffour aka Obour therefore called on creative artists to become evangelists of the anti-corruption fight.
The Ghana Actors Guild (GAG) President, Sam Fiscian who was also present at the programme expressed the commitment of GAG to the success of the anti-corruption campaign. They would also produce a drama video in this regard.
The 2019 Ghana Music Week was also launched at the programme.
The theme for this year’s celebration is “The Role of Music in the Implementation of the National Anti-Corruption Plan (NACAP).”
Activities lined up for GMW 2019 include an anti-corruption walk in Kumasi and Accra, Presidential Grand Ball and Gospel Concert among others.
In the meantime, some stakeholders of the entertainment industry have doubted the transparency in Obour’s administration, suggesting that he mismanaged some 2 million cedis that was given to the union a few years ago.
Obour, who is the youngest musician to have acceded the Presidency of the Union would be ending his tenure this year, after serving two terms in office.
–
By: citinewsroom.com | Ghana