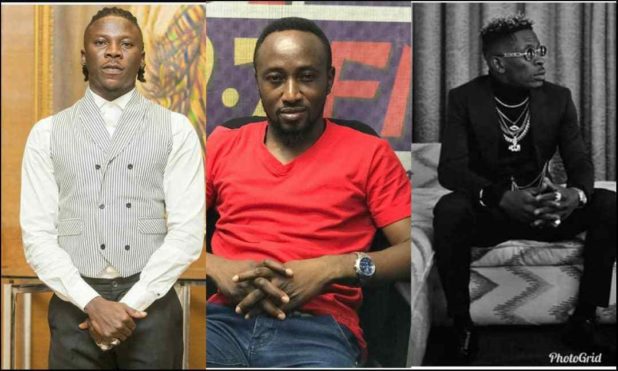 George Quaye
Its been over a week since Vodafone Ghana Music Awards organizers Charter House led by its CEO Mrs. Theresa Ayoade and her board members ban two of Ghana’s biggest musicians Shatta Wale and Stonebwoy after the two engaged in a scuffle on the awards night that almost marred the event.

At the press conference to announce the decision taken against the two dancehall acts, it was stated that aside from their ban, they have both been stripped off their awards won this year and are supposed to return their awards.

Some fans and music lovers kicked against that decision by the board asking them not to return their awards.

Well, the PRO for Charter House George Quaye has revealed in an interview on Peace Fm revealed that despite the sanction the two artistes are yet to return the awards the won on that night.

“I am not sure the Board is in the position to chase them to bring the plaques. But as courtesy demands, it is required of them to return it. We pray they do the needful,” he said.

He continued, “I have not had any directive from the VGMA Board (Chairman) to go after them to bring the plaques. But it is on record that they have been stripped of the awards they won on the night.”