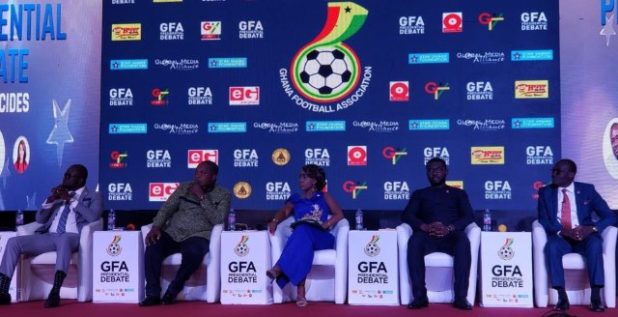 A historic night on Monday saw the five candidates for the Ghana FA top job engage in a hearty Presidential Debate to a national audience.

Conspicuously absent was George Afriyie, thought to be one of the frontrunners in the race. The former GFA Vice President says he could not postpone a prior business engagement outside the country.

But as they say, the show must go on. And go on it did, at the College of Physicians and Surgeons in Accra.

To a crowd of invited guests, and a global audience, Amanda Clinton, George Ankomah Mensah, Kurt Okraku, Nana Yaw Amponsah, and Fred Pappoe contested ideas to improve the lot of football in Ghana.

Joy Sports Gary Al-Smith rated the performance of the candidates, putting Nana Yaw Amponsah ahead in the end.

The criteria used were as follows:

The GFA Presidential Debate may not change how the delegates want to vote on Friday. But it is key, because no matter who wins, she/he would need to convince the general public and corporate bodies that the products of the FA are worth sponsoring again.

Anybody who the debate is a waste of time is not aware of the times we are in.

Football is not for football people anymore. If it were, why have the candidates all been granting interviews upon interviews?

The five candidates all did their bit. But I was impressed, in this order:

Idea after practical idea. Backed his submissions with data. He was very clued into the timing of his ripostes, leading to engaging rebuttals whenever he opted to do so. Monday’s star of the show. It is fitting because he has campaigned longer than anyone else for this job, having started articulating his plans since 2017.

Even before the debate, I knew he would raise eyebrows with his presentation.

That’s because I have interviewed him extensively a month ago on Joy First Take. And listeners on that Friday generally felt moved with the clarity of thoughts and conviction of his verbal materiel.

Treated proceedings like a lawyer facing a jury he had to sway for a verdict. I only put him second because, on a few subjects, he rambled on slightly, and was not as practical as Mr. Amponsah.

His conservative nature meant the former GFA Vice President was not as bombastic as the first two.

Yet, he was not short on being straight to the point, particularly in the first round of submissions. Was caught by the time once or so, but left the audience in no doubt of his control over issues.

Per his own standards set during this campaign season, Mr. Okraku underwhelmed.

With his constant use of the phrase “fully functional”, he sounded tiring by his third submission, saying too many things at once, when he could just have gone the Fred Pappoe way by being concise.

When Ohene Brenya asked her what she intended to do about the new Division One statute if given the nod, Ms. Clinton – with the cameras on her – was completely caught off guard.

She could only let out a shy laugh because it was out of her depth.

She made just two coherent points: one on women’s football, and on the capitalist nature of the football market: “If the market is better [elsewhere] and people would go, they would go. We should focus on developing more talent.

Besides that, she would not want to watch a replay of the debate. Neither would we, on her behalf.

He was not at the debate because he had a prior arrangement in Turkey. The former GFA Vice President should not be too bothered about the quality of ideas presented.

Nothing earth-shattering was said, and yet…

And yet, in the context of presenting himself to the larger Ghanaian populace – particularly, corporate entities – on this platform, he has missed a fine opportunity.

Even Ms. Clinton, who had a night to forget, has launched herself into the public consciousness for her own good. She lost nothing by being there. Maybe, Mr. Afriyie could have put this debate before his business appointment.

Previous Akufo-Addo releases GHS2.2bn for road contractors
Next Man Who Assaulted Bobrisky Needs ₦1M To Fix His Car And Phone