I didn’t pay ‘bribes’ to become GFA President, my sweet face got me votes – Kurt Okraku 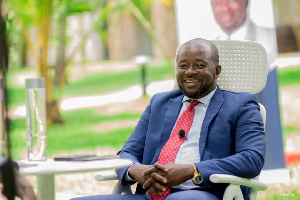 Even though he was elected as the new Ghana Football Association (GFA) President about two weeks ago, Kurt Okraku is still facing questions over the elections that saw him voted into office.

Despite winning all three rounds of voting at the GFA’s Elective Congress, including the solo final round which saw him almost unanimously endorsed, there have been claims that Kurt’s campaign was ultimately successful because he influenced the delegates financially.

Responding to the claims on TV3’s Hot Issues, Mr Okraku said that although he did provide funds for some persons who supported his campaign, this was not done with the aim of influencing the votes of any of the delegates.

“There were one or two situations where people couldn’t afford transportation to come over. So once they have to travel because of you, you have to help them.”

He added that he didn’t “exchange waakye”, humorously referencing the Ashanti Regional FA elections, in which the losing candidate had suggested that the delegates were convinced to change their minds and vote for his opponent because they were given food prior to voting.

When asked again by the interviewer, this time a little more directly, whether he “exchanged gifts for votes? Kurt answered, “No”

He then added: “My sweet face did the trick.”

The Dreams FC Chief Executive Officer (CEO), was elected the new President of the GFA at the end of October.

Okraku led the way after the first round of voting and was a vote away from becoming the new President of the Association after the second round.

He polled 59 votes representing 50% of votes cast with candidates needing at least 60 votes to win.

George Afriyie, who polled 40 votes in the first round improved to 43 votes but was still well behind Kurt Okraku.

Nana Yaw Amponsah saw his tally slashed from 27 in the first round to 16 in the second.

However, as delegates were voting in the third round, George Afriyie conceded, saying he was “a unifier and a team player who works for football.”

In the third round, Okraku was endorsed by 93 delegates.

Kurt Okraku thus becomes the 7th GFA President since 1992 and the 24th in the Association’s history.

Amanda Clinton and George Ankomah both dropped out in the first round with 0 votes.

He will now serve a maximum of two four-year terms in office following the adoption of the new statutes GFA at September’s Extraordinary Congress.

Nzema Kotoko President, Mark Addo was also elected as his vice-President on Tuesday.