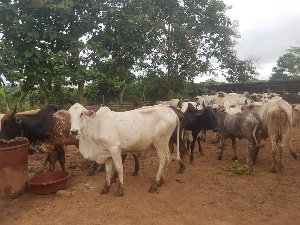 Ghana’s dream of having a meat factory that meets health and nutritional standards appears to have been reignited with the setting up of the first meat factory in the Ashanti region.

This comes after several failed attempts to revamp the good old Zuarungu; Pwalugu and Bolga meat factories that went under in the late 90s.

The factory is strategically positioning itself to fill a huge meat deficit as players in the Meat products industry fear Ghana’s quest to reduce meat imports by 95% in five years will hit a snag without the right policies to support local production.

It is estimated that Ghana will run out of beef in one week and chicken in five days; if frozen meat importers stop their operations; as the WEST AFRICAN country is 90% import dependent.

Some 243 thousand metric tons of meat costing in excess of 2.4 billion dollars land on the shores of Ghana every year making meat one of the cardinal factors piling exchange rate pressures on the local currency.

The supply chain from the farm gate to processing floors to sales outlets is estimated to hold millions of dollars in revenues and thousands of jobs, unfortunately, going to countries like South America, Europe, Burkina Faso and Niger where Ghana sources its meat imports.

The Ghanaian Government this year (2020) kick-started the flagship rearing for Food and Jobs program to increase local meat production by some 795 thousand metric tonnes in five years.

Chief Executive Officer of The Meat Factory in the Ashanti Region, Dr. Fred Bedzrah, however, contends without a comprehensive policy direction targeted at meat production; Ghana will remain far off in attaining meat sufficiency.

“We think that Ghana can be meat sufficient but as it is now we are very far from that. If our policies, especially in the Agric Sector, shifts a bit from the concentration on food crops; if we enact policies that will encourage people to go into growing animals we can easily fill that gap,” he pointed out.

A major factor that agronomists have highlighted for consideration in any meat sustainability effort is the creation of fodder banks and ranches for large scale animal husbandry and livestock farming.

The absence of such facilities has often created bloody clashes between local farmers and nomadic herdsmen who devastate huge tracks of farmlands with their grazing cattle.

The Meat Factory in the Ashanti Region has three huge ranches at Boankrah and Pasoro spanning some 50 acres of land where it sources its meat.

Dr Bedzrah, however, points out that the ranch system with its compliments of veterinary services, fodder vegetation, and irrigation channels is heavily capital intensive and will struggle if left to the private sector

He told reporter, Ivan Heathcote – Fumador, “having a ranch like this and setting up a meat factory comes at a huge cost. The same thing can be done with our vast plain fields at Agogo and Affram Plains where there is a huge possibility of doing controlled ranching. Other countries in Europe and South America have made huge gains from this kind of ranching and I think as a nation we should be looking in that direction.

The Meat Factory in Kumasi is expected to create a comprehensive Farm-To-Plate meat chain that eliminates the hazards of disease-infested, unwholesome meat sold to the public in the several unregulated slaughter houses in the Ashanti Regional capital Kumasi.