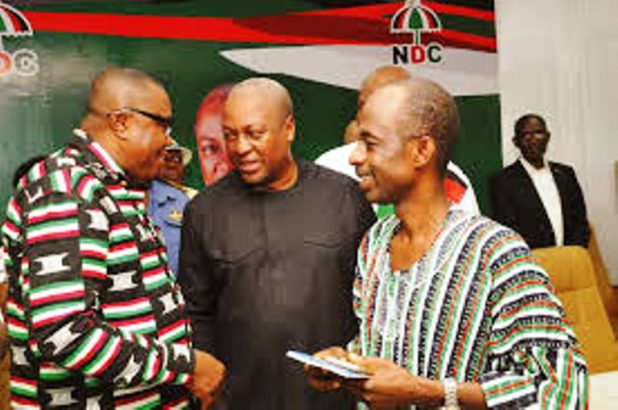 The General Secretary of the opposition National Democratic Congress (NDC), Mr. Johnson Aseidu Nketia popularly called General Mosquito has assured all the defeated aspirants in the just ended parliamentary primaries that ministerial appointments and other positions await them in 2021.

To this end, he has tasked all the defeated aspirants to support the winners and the flagbearer of the party for massive victory to enable them achieve their aim.

Mr. Aseidu Nketia saluted Ajumako-Enyan-Esiam constituency NDC for the overwhelming support for the Incumbent Member of Parliament (MP) for the area, Mr. Cassiel Ato Baah Forson he described as the best discovery NDC MP for the party not only in his constituency but the entire party.

He revealed that Ato Forson who joined the party at London in the United Kingdom(UK) Ireland branch decided to come to Ghana and fight for the party and lo and behold snatched the seat from the late  former MP for the area who was on the ticket of New Patriotic Party (NPP).

“Late Edumadze who NDC described as a lion MP scared off NDC activists who tried to contest him but brave Ato Forson was able to win the seat for NDC”, he recounted

According to him, during his monitoring he observed that people of Central Region will change their minds by voting against the governing NPP. “Even the stronghold of NPP is dying for NDC to come back to power to save them from the economic hardship.  Government of the mafia, by the mafia and for the mafia so those who are not part of the mafia are suffering in the hands of their own government”.

On his part, the Incumbent MP, Ato Forson predicted victory for Mahama and himself in the upcoming general elections and appealed to NDC activists to work hard to uplift the party’s image.

He promised to hold Ajumako-Enyan-Esiam constituency seat tightly for N and called on his party members to put trust in him.

Previous Woman seeks divorce from husband who loved her too much
Next A/R: Two persons found dead in separate “mysterious” circumstances