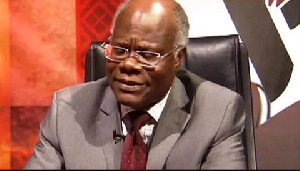 Lawyer Kobina Tahir Hammond says he cannot brand the people of the Volta Region as non-Ghanaians and that the viral video about him has been misconstrued.

According to K.T. Hammond, who is the MP for Adansi-Asokwa, the viral video of him speaking to the press that has been labelled as ethnocentric comments against the people of the Volta Region was taken out of context.

“That is not what I said. How can I brand the whole population of the Volta Region as non-Ghanaians? That was not what I said. I did not emphatically make that point. I have very good friends from the Volta Region including Fifi Kwetey, Okudzeto Ablakwa, Doe Adjaho some of whom are members of my fan club. I have grown well enough in politics to know that you do not have to stigmatize a particular section of a country because of politics. I didn’t say that,” KT Hammond told Citi News.

Many Ghanaians have chastised the MP for making some unsavoury comments which a section of public believes can result in chaos between Ghana and Togo.

Whilst explaining the deployment of the Military in the Volta Region, the MP stated that some foreign nationals from neighbouring Togo had participated in the election re-run of the 2008 general elections as Ghanaians in Ketu South Constituency.

Therefore, the Military is in the Volta region to check the influx as Ghana prepares to conduct a new voter registration exercise ahead of the December polls.

“The military is there to make sure you vote if you are Ghanaian and if you have the constitutional right to vote. That’s all there is. They are not electoral officers, but they are peacekeeping forces. They are keeping the peace. They [Togolese] walk into the [Volta Region] and come out normally but they are not Ghanaians. When they walk in there, they can do whatever they do so I guess that is the reason for that,” KT Hammond said in the viral video.

Meanwhile, the flagbearer of the opposition National Democratic Congress (NDC) has condemned the viral video of the MP.

In a statement issued by his Special Aide Joyce Bawah Mogtari, former President John Mahama said that the deployment of troops to the regions is simply to prevent residents of these regions from the impending registration and not for any other reason.

“To send troops into regions in times of peace for the sole purpose of preventing them from registration amounts to declaring war on them,” the statement said.

“Any President sanctioning this sort of activity stands in breach of his oath to the people of Ghana. Any President doing this commits a grave sin against the very people he swore to protect.”