The General Secretary of the governing New Patriotic Party (NPP), John Boadu has likened the National Organiser of the opposition, Joshua Akamba to a dog. 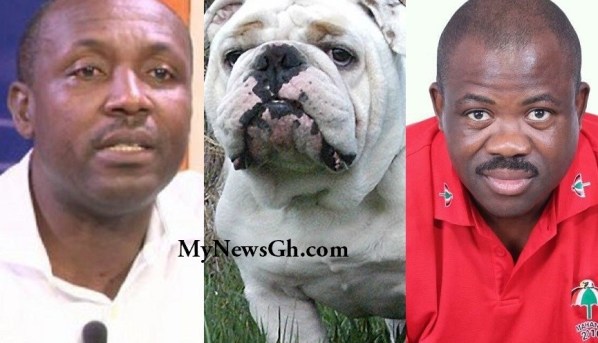 According to him, the National Democratic Congress (NDC) top executive is not clearheaded and does accord issues with sober thought before commenting or making a sound judgment of same.
He was speaking on the character of the National Chairman of the NDC, Mr Samuel Ofosu Ampofo on Accra-based Okay FM and monitored by MyNewsGh.com when he said, “he is not like my friend Joshua Akamba who behaves like a dog; you know Akamba is like a dog”, he told Kwame Nkrumah Tikesie.
“Unlike the proverbial cat that would simply ignore transient events, Akamba like the dog would begin barking”, Mr John Boadu said of the character of Mr Samuel Ofosu Ampofo to drum home his argument that, the utterances of the latter on a leaked tape were deliberate and “well-orchestrated”.

He challenges the National Chairman of the NDC to be bold and own up to the contents of the leaked tape and stop portraying the character of a saint.

” He must be honorable enough to admit he said those things to appease his party people because he was obviously under pressure to please them at that moment; the fact that you won’t come out and bark like Joshua Akamba doesn’t mean you cannot say those things” John Boadu said.
Mr Samuel Ofosu Ampofo alongside two of his executives; National Communications Officer, Sammy Gyamfi and a Deputy National Communications Officer, Kwaku Boahen have all been charged with conspiracy to commit crime, to wit kidnapping and conspiracy to commit crime, to wit threat of harm, owing to the contents of the said leaked tape.

The docket on the case has been sent to the Attorney General to decide the fate of the three.