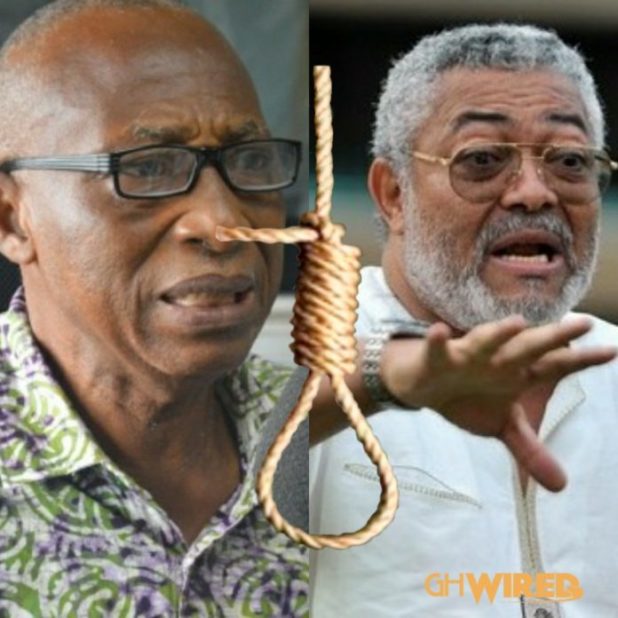 Major Retired Osahene Boakye Gyan, one of the brains behind the June 4 uprising, has described former President Jerry John Rawlings as “a walking illegality”, who must be arrested and hanged for his role in the overthrow of the legally constituted Hilla Limann government in 1981.
He said per the dictates of the 1992 Constitution, Mr Rawlings must not be walking a free man because treason is punishable by death.
“He has hanged himself; I’m not the one saying it. Because the current constitution says if you overthrow a constitutionally elected government, you have committed high treason punishable by public execution; it doesn’t matter how long it takes because crime has no time limit”, Osahene Boakye Gyan said in an interview with Okay FM monitored by Media.

“Indemnified by whom; I didn’t indemnify him and are you saying I’m not a Ghanaian; and there are a lot of us who never indemnified him from that nonsense, especially when you and me have used the same principle to hold other people to account, how do you indemnify yourself from that”, he quizzed when his attention was drawn to the fact the 1992 Constitution gives indemnity to the former president.

Major Boakye Gyan also described the 1992 Constitution as Mr Rawlings’ own “death warrant” because Article 1 section 3 to 10 “is clear on it. I wasn’t part of those who wrote the constitution; he himself signed it, so he signed his death warrant, that’s why I say he’s a walking illegality”.

“Get the constitution and let’s read it through and Ghanaians would understand what I’m trying to talk about; if you are a Head of State and you sign that constitution into law, you cannot criminalise something in the future and decrimiliase it in the past; it’s not possible, the law is the law”, he asserted.
“I’m not the one saying it; he has signed the constitution to hang his own self but if for some reasons it can’t be enforced, that’s not my problem; it’s a problem for all Ghanaians; that’s why I’m saying the 1992 Constitution needs to overhauled because it is an emergency constitution”.

Major retired Boakye Gyan has been an avid critic of his former friend following the 1981 coup d’etat that ousted the Hilla Limman government, though he was the main architect of a similar action in 1979 that “cleaned” a lot of state officials and private businessmen in Ghana at the time.

Previous LEAKED: Prempeh College basic school students hold s-x party in a swimming pool
Next (video)lady Who slept with over 100 men and tried to take her life shares her story