Breaking News
Home / POLITICS / Sir John was a good man, I will miss him’ – Bawumia mourns

Sir John was a good man, I will miss him’ – Bawumia mourn 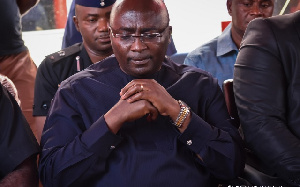 Vice President Alhaji Dr. Mahamudu Bawumia has sent out a message of commiserations to the family of the late Kwadwo Owusu Afriyie known in politics as Sir John.

The Forestry Commission CEO passed away on Wednesday at Korle Bu Teaching Hospital.

In a post on his verified Facebook Timeline, the Vice President indicated that he last spoke with the former General Secretary of the NPP on Tuesday, June 30.

“I have learnt with sadness the passing of Lawyer Kwadwo Owusu-Afriyie aka Sir John, former General Secretary of the New Patriotic Party and Chief Executive Officer of the Forestry Commission. I spoke with Sir John only yesterday but little did I know that was our last conversation.

Sir John was a good man who truly paid his dues to the Party and Ghana. I will miss him,” Dr Bawumia’s post read.

Sir John died at the Intensive Care Unit of the Korle-Bu Teaching Hospital on Wednesday, July 1, whilst undergoing treatment for COVID-19.

His death comes as a shock to many politicians and political actors.

Eugene Arhin, the Director of Communications at the Jubilee House, shared a tribute some few minutes after the sad news of the passing of Kwadwo Afriyie Owusu was announced.

“RIP Sir John…Till we meet again,” he wrote on Facebook.

Gabby Asare Otchere-Darko, a relative to the President and key NPP strategist also wrote on his Facebook Timeline, “Only this afternoon I called to wish him a speedy recovery… This is truly shattering! Tough to swallow… Sleep easy, Sir John.”

Kwadwo Owusu Afriyie was born in the Ashanti Region.

He attended the Seventh Day Adventist Secondary School in Bekwai from where he obtained his GCE Ordinary level certificate.

He then proceeded to obtain his GCE Advanced Level certificate from Konongo-Odumase Secondary School in Konongo.

Kwadwo Owusu Afriyie was admitted to study Political Science at the University of Ghana, Legon, after which he enrolled at the Ghana School of Law, Makola, where he graduated with Bachelor of Laws (LLB).

He was then admitted as Solicitor and Counsel of the Supreme Court of Ghana.

During the John Agyekum Kufuor administration, he was appointed head of legal services at the Ghana National Petroleum Corporation (GNPC).

He was later made to act as the Deputy Chief Executive Officer of the corporation.

While managing his own firm, Afriyie was also actively engaged in Ghanaian politics.