(video) NDC, NPP MPs unite only when it benefits them – Short 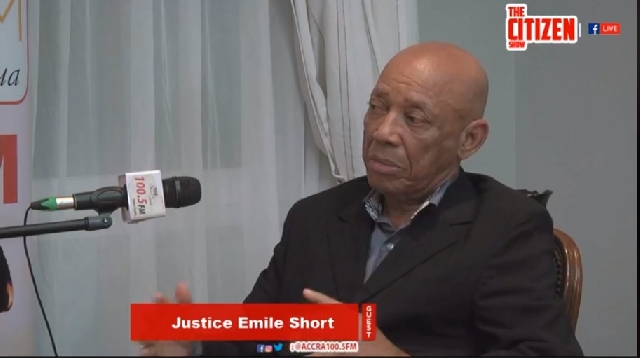 Emile Short in an interview with Kwabena Bobie Ansah on Accra100.5FM’s ‘The Citizen’ show

A former Commissioner on Human Rights and Administrative Justice, Mr Francis Emile Short, has said that the only time legislators from both aisles of parliament unite is when it is in their collective benefit.

Apart from such occasions, he said lawmakers from the governing New Patriotic Party (NPP) and the main opposition National Democratic Congress (NDC) do not agree on anything else.

Mr Short expressed concern that: “You hardly have consensus between these two dominant parties” but “the only time you would get consensus is when they introduce a policy that will benefit both Members of Parliament of the political divide”.

He attributed the development to the winner-takes-all phenomenon, which is characterised by the governing party assuming total control of everything after winning power.

In his opinion, “the winner-take-all system is one of the greatest impediments to our democratic governance and we have to address that”.

Mr Short said: “Our politics is so adversarial; it is such that each party wants to unseat the other by fair or foul means because the stakes are very high”.

He told Kwabena Bobie Ansah on Accra100.5FM’s ‘The Citizen’ show in a one-on-one interview that too much power is vested in the President as far as appointments and major decisions are concerned.

Watch the full interview below: