By:brightwebtv.com/Martin Awuku
”You cannot go into the National Democratic Congress (NDC), without becoming corrupt as a leader,” the presidential candidate of the People’s National Convention (PNC), Dr. Edward Nasigri Mahama has said in an interview with Rainbow Radio’s Kwaku Owusu Frimpong. 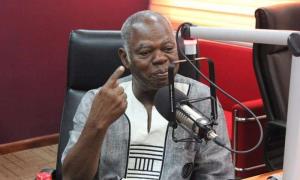 In his view, the ruling government NDC is ”systematically and technically corrupt”.

Dr. Edward Nasigri Mahama said, Ghana’s biggest problem is corruption which is not only found in government, but in civil service, public service, the private sector among others.
”People are doing things they don’t want to do for various reasons. Some to survive, some to build houses before they retire; some to buy cars; They are doing things they don’t want to do. Corruption is everywhere in this country, its an endemic problem and i think fighting corruption should be tackled by initiating an approach to it systematically.”
He said, his other contenders, President Mahama and Nana Akufo Addo are not his enemies rather corruption, ignorance, and poverty are his enemies which he wants to fight.
The National Health Insurance (NHIS), the GETFund and other policies being implemented by government he noted were all proposed by the late Hilla Liman, a former President of Ghana on the ticket of the PNC.

Dr. Edward Mahama said, his ”New Beginning; New Deal;and New Force”, message will focus on job creation, agriculture, economic stability among other policy programmes that will transform Ghana and also woe Ghanaians abroad to invest back in the country.
God he said has blessed the country with numerous resources and the only thing left for us as citizens, is to have selflessness, incorruptible and competent persons to manage the resources of the country, to benefit the people.