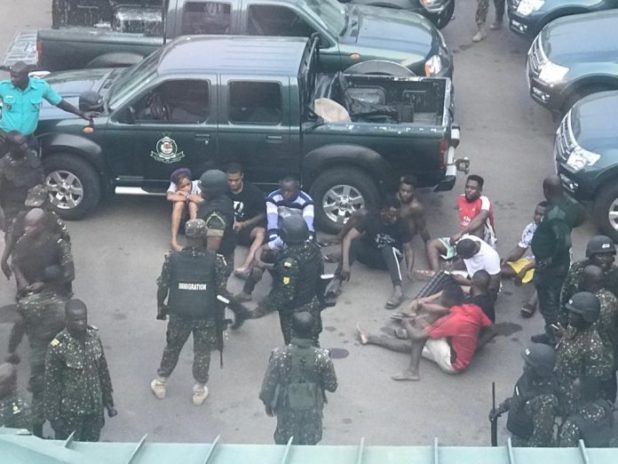 A total of 11 Pakistani nationals have been arrested in Techiman, the capital of the Bono East region, officials of the Ghana Immigration Service have confirmed.

They were arrested on Sunday, June 9, 2019 at their hideout at Kenten-Anyinabrem, a surburb of Techiman, about 370km from the national capital, Accra.

The individuals, all males, were arrested upon a tipoff, a local media reported. Municipal Commander of the Ghana Immigration Service in Techiman, Chief Superintendent Annor Abrokwa said a search has been launched for their Ghanaian counterparts to assist in their investigations.

“We received information that they were hiding at a location close to a refuse dump in the area. When we arrested them, they told us they were in the area for evangelism and that they were brought into the country by one Amadu Seidu. We contacted local authorities including the Chief Imam who were unaware of their status in the area”, Chief Superintendent Annor Abrokwa told Sunyani-based Ark Fm.

“When we arrested them, they had no passports so this morning we got hold of their passports and we are preparing to transfer them to our headquarters in Accra for further investigations”, he added.

Chief Superintendent Abrokwa called on residents to report any suspicious activities of such individuals to the appropriate authorities for further action.

He also warned landlords in the area to be wary of such individuals when renting them rooms.

The development has raised security concerns among residents who are calling for an improved security in the area.

Both The United Kingdom (UK) and the Canadian High Commissions have updated their foreign travel advice for their nationals travelling to Ghana, warning that terrorists are likely to try to carry out attacks in the country.

The advice published on the website of The United Kingdom travel guide adds that localised outbreaks of civil unrest can occur at short notice, and can become violent (sometimes involving weapons).

The advice reads: “If you’re in these areas, you should remain vigilant, exercise caution and follow the advice of local authorities. If this does happen, local police may impose curfews to contain the situation.

The victims are yet to be rescued as Police mount a search for them. Canadian authorities have also contacted their families over the development.