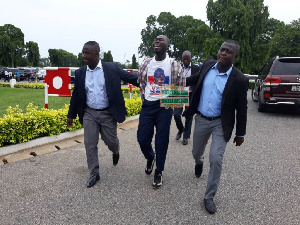 A 35-year-old man attempted to hang himself in Ghana’s parliament Thursday afternoon.

According to Abednego, the man who has been identified as Kojo Mensah attempted the act at the Public Gallery of parliament, much to the surprise of parliamentarians and others in the gallery where he wanted to commit his crime.

Even though the man is yet to be identified, a close look at his dressing suggests he was wearing a New Patriotic Party (NPP) t-shirt with the image of Kwesimintsim Member of Parliament, Joseph Mensah printed on it.

The man has since be whisked away by police.