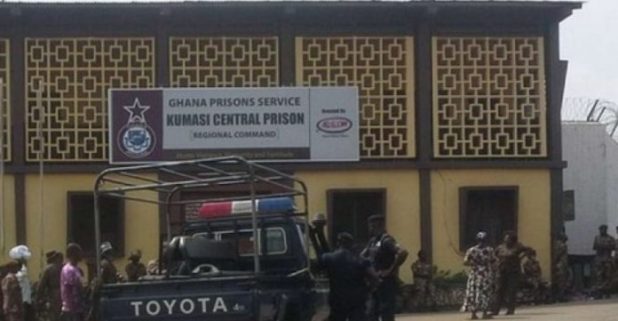 The Kumasi Central Prison where Mohammed Abdallah is serving his sentence

However, Corruption Watch (CW) has found that it is not only about accepting money or items of value that undercuts the integrity of the criminal justice system.

It is also about the abuse of process, abuse of the system, and ultimately a loss of the public trust.

That is the case of a Junior High School graduate, whose family claims he was under 16 years old, but was handed a 25-year jail sentence in the Kumasi Central Prison for robbing someone of GH¢10.00, an allegation the juvenile denied.

Aside being jailed 25 years as a juvenile, he was also sentenced to an adult prison where he has already spent 10 years of his jail term.

Born on July 1, 1993, Abdallah Mohammed , who had exactly eight days to celebrate his 16th birthday, was already in celebration mood for successfully becoming a graduate after completion of his Basic Education Certificate Examination.

But, his happiness was cut short and he found himself in the grips of the law on June 23, 2009.

He was arrested by a mob, together with a supposed accomplice, Seidu Elliasu, 25, (trader) at Akwatia Line, Kumasi in the Ashanti region for allegedly attacking one Moro Haruna and robbing him of his GH¢10.00 and a bunch of keys. A crime Abdallah denied.

The two suspects, after receiving severe beatings from the people, were sent to the Zongo Police Station.

The then 15-year-old Abdallah and his alleged accomplice, Seidu were later sent to court and were charged on two counts; (a) Conspiracy to commit crime contrary to section 23 (1) of Act 29/60 and (b) Robbery which is contrary to section 149 of the Criminal Code 1960 of ACT 29.

The Kumasi Circuit Court was presided over by his Honour, Emmanuel Amo–Yartey (Esq).

From information gathered by CW, the family of Abdallah was not informed about the arrest and prosecution of the underage boy, contrary to the provision of juvenile criminal justice law, which required the presence of the parents or guardians of the juvenile before questioning.

According to details provided in court, the complainant, Moro Haruna, who lived in Amoeba, a suburb of Kumasi on 23rd day of June 2009, while returning home from a visit, met both accused persons, Abdallah and Seidu, who attacked him physically and ordered him to surrender everything on him, but according to him (Moro Haruna), he refused to comply with the order.

He said, Seidu then held his shirt against his neck while Abdallah searched his pocket and removed cash of GH¢10.00 and a bunch of keys. Seidu then collected the bunch of keys with which he hit his head and wounded him.

Master Haruna said he managed to escape from their grips and rushed to inform his brother and others who rushed to the spot where the incident happened and arrested the accused persons.

Suspect Seidu is said to have pleaded to return the GH¢10.00 they collected from the complainant to settle the case amicably, but his plea was not accepted.

Mohammed’s response
Responding to his accusation, then suspect Mohammed denied knowing anything about the incident and denied knowing his alleged accomplice, suspect Seidu prior to his arrest.

According to him, on the day of the incident, he was only passing through the area with one Rabbi, a neighbor when the people arrested and beat him up.

Ten years into his jail term, then suspect Mohammed maintains that he was mistakenly arrested, tried and sentenced to 25 years imprisonment with hard labor, for a crime he didn’t commit at age 16.

During cross-examination, the complainant, master Haruna and the first accused, master Seidu are said to have admitted they did not know the suspect Mohammed.

On July 27, 2009, the court, presided over by His Honour, Emmanuel Amo-Yartey read his judgement and sentenced the accused persons to 25 years imprisonment with hard labor.

Master Mohammed is now 26 years and has 15 more years to serve at the Kumasi Central Prison.

According to master Mohammed’s father, Mohammed Nurudeen, his son didn’t live under his care but rather interchangeably under the care of his sister and mother at the time of the incident, hence when he disappeared for days, his aunt thought the then boy had gone to his grandmother or aunt.

Mr Nurudeen said he only got to know his son was in the grips of the law when his late friend, who operated lottery services in different locations including the prisons, returned from the Kumasi Prison to inform him that his son asked him to inform him (his father) to come to his rescue when he met him at the Kumasi Central Prison where he had been on remand without the knowledge of his parents.

After hearing the shocking news, he located the police station in-charge of the case and went there on the date he was informed was the hearing of the case of his son.

He said, he went to the police station because he did not know of the particular court they were taking his son to.

Mr Nurudeen added that he received the shock of his life when the officer returned to the station only to inform him that the then boy had already been to court and had already been sentenced to 25 years imprisonment with hard labor.

“I rushed to the police station because I didn’t know the court they were taking my son to, so I was waiting for the crime officer to come to work so I can go with him to the court only for him to return very late and walk pass me, then I walked to him and told me the reason for my visit only for him to tell me it’s too late because he was just returning from the court where my son was sentenced to 25 years.

“How can you jail my 16-year-old for 25 years over GH¢10? I feel I failed my son because if I had money and knew how to get justice for my son, he wouldn’t be in the situation he is in now.”

Mr Nurudeen lamented about how his son was denied access to his parents and right to legal representation contrary to the provisions of the law.

According to the father, he never knew the then boy’s age could play a factor in the duration of his sentence and type of prison as he didn’t have legal representation during the hearing.

The juvenile was sentenced to 25 years imprisonment to serve his tern at the Kumasi Central Prison and has spent the past 10 years among adult prisoners.

On April 1, 2014, the family of master Mohammed filed an appeal, but the solicitor of the application could not pursue the case due to ill health.

The family of master Mohammad, now 26 years is calling on State authorities, Civil Society Organisations and Human Rights Organisations, to have a second look at his case and reconsider his 25-year jail term for a first time offender.

Storms-Well Mensah, a member of Human Rights Defenders-Gh, who drew the attention of CW to the case, said the boy is depressed in prison, particularly as he is surrounded by adults.