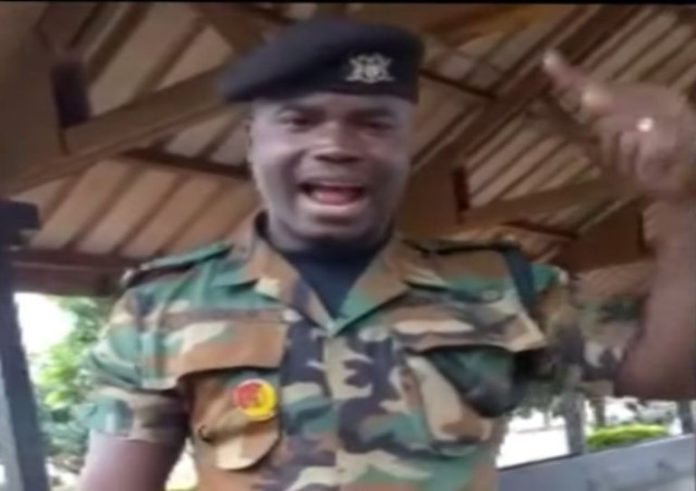 A soldier who recorded himself in criticising the intended construction of a new Parliamentary complex, has been released from incarceration.

Lance Corporal Isaac Wassa was punished by the Armed Forces for breaching the military’s code of conducts after the video went viral.

He was sentenced to 90 days detention in the guardroom after investigations.

But the Director of Public Affairs of the Ghana Armed Forces, Col Eric Aggrey Quarshie has confirmed to Myjoyonline.com the release of the soldier.

Reacting to his release, the Economic Fighters League, a pressure group that was vociferous in criticising the intended building of the chamber, lauded the action.

“We are happy to inform all Fighters and the general public that Lance Corporal Wassa has been released from detention,” the EFL wrote.

The Fighters League had petitioned President Nana Akufo-Addo over the soldier’s incarceration.

The EFL said the Lance Corporal “echoed the same sentiments that were being shared by the masses. He demonstrated bravery in speaking out for his country when it was clear that well-meaning people could not keep quiet.”

“Even though his release was not through pardon as we petitioned the President to do, we see it as a positive development,” the statement added.

Meanwhile, Parliament has been forced to abandon the intended construction following pressure from the public.

Read the EFL’s statement below

WE ARE HAPPY LANCE CORPORAL WASSA HAS BEEN RELEASED

Lance Corporal Wassa is remembered as the gallant young soldier who spoke out in defense of his country against the proposed wastage of 200 million dollars on a needless parliamentary chamber.

He was then sanctioned by the military command and detained in Recce Guardroom for joining the #DropThatChamber campaign. Leadership of the Fighters visited him on 27th July 2019 and informed him of our intention to petition the President to grant him pardon. This, we also announced publicly (https://www.nsernpii.com.urma-camp-leaders-of-economic-fidhters-leadue-visit-dronthatchamper-soldierf).

We subsequently filed the petition (https://www.mviovonline.cominews/2019/Auaust-10th/economic-fighters-league-netitions-akufo-addo-over-detained-soldier.oho).

We are happy to inform all Fighters and the general public that Lance Corporal Wassa has been released from detention.

Even though his release was not through pardon as we petitioned the President to do, we see it as a positive development. Young people of all walks of life are encouraged to stand up for their nation without any fear or favour. We stand in solidarity with everyone taking action against the oppressive system.

We must know that the situation with Corporal Wassa is not isolated.

The system that has silenced the youth for so long cannot be allowed to stand. We have to come together and assert our right to a better future and this can only happen if we do away with all fear.