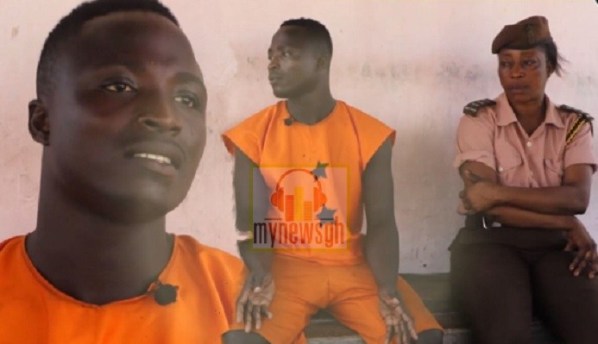 The leader of a robbery gang, Richard Adarkwaa has disclosed that he was slapped with a 15-year sentence and currently languishing in the Sekondi Central Prison without getting his share of GH¢900 the robbery operation he led.

The convict said he would have died a useless death if a Samaritan had not rescued him from an angry mob who were beating him mercilessly when he was arrested and sent home for police search.

He bemoaned that he would have sought consolation in the fact that he enjoyed some of the money he and other armed robbers robbed from his former employer at Sefwi Bekwai in the Western Region.

Richard Adarkwaa explained that after the robbery, he requested for his share of the GH¢900 but he was told to exercise restraint and that the money will be shared when they move from Sefwi Bekawi to Kumasi.

Adarkwaa said his slippers got torn and was given GH¢ 50 to buy a new one from a nearby shop but upon return he realized that the other two had bolted away with the money.

The prisoner indicated that he was arrested on the same day of the robbery operation which was his first attempt because somebody had seen them run into the bush to seek refuge.

According to him, he was influenced by his friends to rob the Chinese Company he was working for as a driver because Christmas was approaching and they needed money to spend.

He narrated that he consented to the idea because the owner of the Chinese company always carried huge sums of money on him meant for salaries of workers and other stuff.

Richard Adarkwaa recalled that being a 17-year old, he was the youngest among the armed robbers when they went on the operation.

Speaking in an interview from the Sekondi Central Prison with Crime Check TV sighted by MyNewsGh.com, ‘Two of my friends brought the idea that we should rob the Chinese company I was working with because Christmas was approaching. My boss always carried money on him so I agreed to the idea. But they later bolted away with the money, I get sad because I was arrested and sentenced 15 years without having my share of the money. Those who had the money are living their free life’.

He said a day before the operation, he lied to his boss that he was sick so he didn’t go to work.

Adarkwaa stated that he has already spent three years in jail adding that it was a big blow for him when he was jailed.