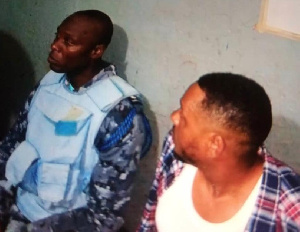 A Police Inspector identified as Godwin Mensah stationed at Agona Swedru in the Central but currently with Operation Vanguard at Obuasi has been arrested for leading his colleagues to rob a gold dealer.

The Inspector was reported to have embarked on the operation alongside one unidentified Lance Corporal and a taxi driver who are both at large.

According to the Obuasi police who confirmed the incident to MyNewsGh.com, the two police officers all dressed in police uniforms and armed with AK 47 assault rifles each went to the victim at Memerewa Number 1 near Obuasi.

The suspects arrested the victim and accused him of trading in gold without license and subjected him to beatings while in handcuffs.

The two policemen searched the victim’s living room and forcibly took his cash, the sum of ten thousand cedis, then concealed in a brown envelope, and a black polythene bag respectively kept in his travelling bag.

It is gathered that the suspects took hostage of the victim and escorted him into a waiting Daewoo matrix taxi cab with registration number AC 9310- 18, yellow and white in colour and sped off towards Obuasi.

The Obuasi mile 9 police patrol team upon a distress call received from the victim’s wife moved swiftly and intercepted the said taxi.

The driver in charge of the cab and the said lance corporal managed to escape but luck eluded the said police inspector as he was busted with service rifle number KP-2389922.

Twenty-Eight (28) rounds of ammunition was retrieved from the arrested suspect together with cash the sum of five thousand, eight hundred cedis being part of the victim’s money.

Meanwhile, police disclosed that efforts were underway to apprehend the suspects at large for investigation.