The suspect standing trial for allegedly kidnapping some three girls in the Western Region, Sam Udoetuk Wills, failed to produce his witness, one Kwesi, before the Takoradi District court on Monday. 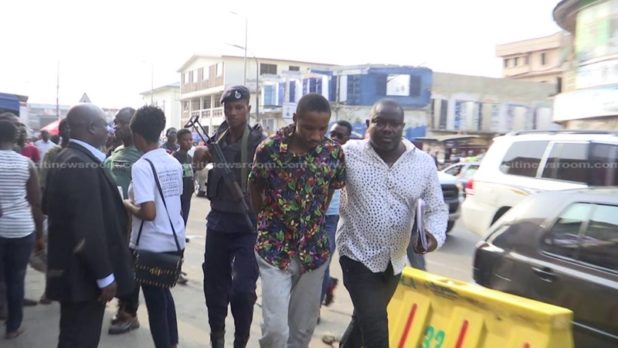 Wills was directed by the court last week to produce Kwesi whom he claimed was among those who aided his escape from police custody.
The suspect is currently facing three charges of escaping from lawful custody, destroying public property and resisting arrest.

He was arraigned last Monday, February 11, where he admitted to two out of the three charges but denied resisting arrest.
The presiding judge, Michael Ampadu, on grounds of ensuring justice told Wills to produce the witness, Kwesi, before ruling is given on the issue.
Wills, however, told the court today, Monday, that he went to Kansawurodo with BNI officials in search of the witness but they couldn’t find Kwesi.
The Head of Operation at the BNI, Lord Nyantwi, who confirmed the fruitless search for the witness, however, appealed to the court to adjourn the case to allow them some time with the witness to aid their investigation.
Presiding Judge Michael Ampadu took into account the appeal by the investigators for more time with the witness to aid their investigation.
He also advised family and interested parties to allow the court to follow due process.
He adjourned the case to March 4, 2019.
CID officer helped me escape from cell – Suspected kidnapper
Sam Udoetuk Wills, last week told the Takoradi District Court that an officer of theCriminal Investigations Department (CID) also aided his escape.

The suspect told the court that he would be able to identify the CID officer who aided his escape if he is presented in a parade.
The Western Regional Police Command has also set up a committee to investigate claims by the suspect in the Takoradi kidnapping case that he was aided by an officer of the Criminal Investigations Department (CID) to escape from police custody.
Sam Udoetuk Wills, escaped from police custody on December 30, 2018, but was subsequently rearrested at Nkroful.
He told a Takoradi District High Court on last Monday that he was able to escape with the help of a CID officer and that he would be able to identify the officer if he is presented in a parade.
The girls who were kidnapped have been identified as Ruth Quayson, Priscilla Blessing Bentum and Priscilla Koranchie.
Their abductions have sparked anger against the police from some residents of the Sekondi-Takoradi Metropolis.
Families of the victims have threatened protests against the police over delays and their possible complicity in the kidnappings.
–
By: citinewsroom.com | Ghana